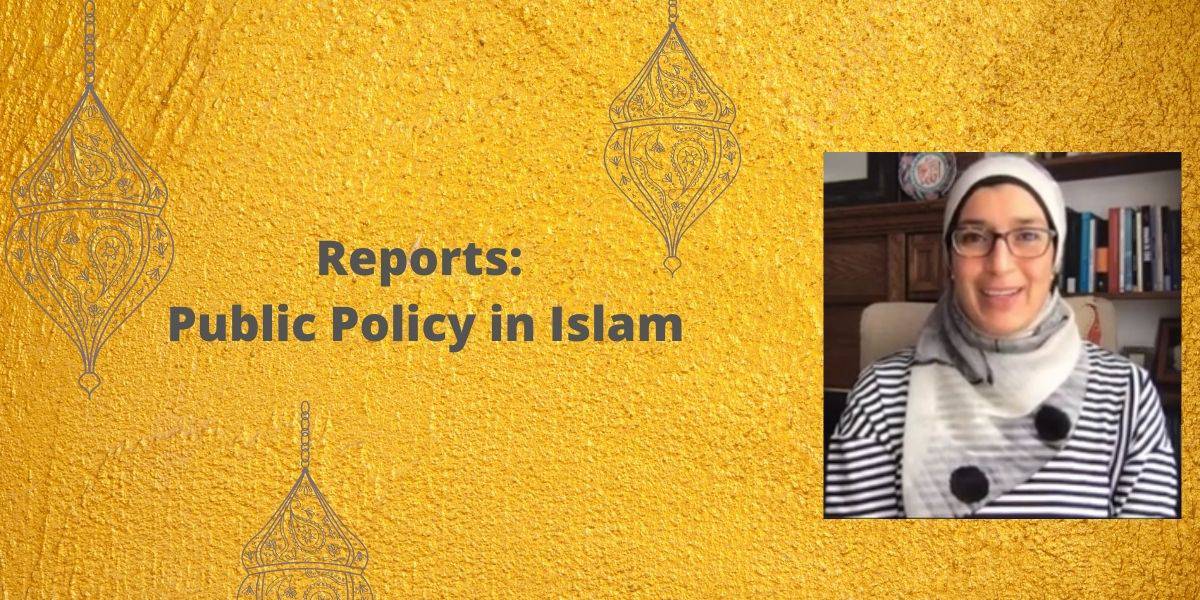 The two-day conference in December was held under the theme “Crises, Conflicts, and other Challenges: Rethinking Governance and Public Policy Reforms in the Mena region”.

“The revelation is an untapped source of Knowledge for those seeking to rectify our earthly life. Its comprehensive nature points us in directions that we may not consider given human limitations or myopic political considerations,” Dr. Abdelgafar said. “The guidance it proffers is not solely religious in the sense that its value for human dignity and environmental stewardship can be verified in the life that we are currently living while it urges us all to work toward a common order of peace and justice.”

She mentioned that the revelation is provided to dignify humanity, encourage creativity and establish our autonomy by leaving the details of its application to human potential, concrete circumstances and prioritization of action in any historical moment. The paper outlined several aspects related to public policy in Islam in addition to explaining the maqasid methodology and the framework that is used to study this field and its associated concerns in the revelation. Key highlights of the paper included:

The paper discussed justice and its universalism, rethinking global systems and,in particular, IPRs as they are related to essential pharmaceutical drugs. In agreement with Contreras et al (2020) when they argued that: “During the COVID-19 coronavirus pandemic, we and others have observed instances in which IPR restrictions, and even fear and uncertainty around IPR, have hindered effective research on vaccines and therapies, as well as the development, manufacturing and distribution of ventilators, testing kits, protective equipment and other medical supplies,” Dr. Abdelgafar cautioned that IPRs were having serious negative impacts on innovation and production of expedient and affordable responses to the pandemic.

“Public policy is generally not subject to religious considerations. Yet, separation of state and religion is an illusory concept and can easily be refuted through a cursory consideration of political parties and platforms around the world,” Dr. Abdelgafar said. She set examples of the US where politicians openly discuss their religious affiliation and beliefs, Canada where religion, especially conservative Christian values, command influence over voter affiliation and party policy differentiation and Europe with its numerous Christian democratic and socialist parties. Moreover, Israel is recognized as a “Jewish state” and refuses to negotiate with the Palestinians on any other premise. In India, Prime Minister Narendra Modi has fanned the flames of Hindu extremism and in China, the claim to state atheism is no less a religion (with Confucianism and Taoism dominating mindsets). Finally, predominantly Muslim societies tend to be ruled by states that claim some reference to Islam.

“The issue is not the confluence of religion and state but what and whose religion is allowed such an existence and how that choice is expressed and in turn influences policy,” she noted.

“Public policy does not normally consult revelation. Yet,revelation offers important guidance on how the world ought to work. Unfortunately, the confusion over the nature of the content of the Quran and Sunnah obscures reference to their guidance,” Dr. Abdelgafar said.The complex understandings presented in the Quran are intended for all of humanity irrespective of diversity in belief.

“Public policy has a significant impact on the quality of life of individuals and communities. Revelation can offer invaluable guidance for the courses of action that public authorities can take to address a problem or take advantage of an opportunity whether for the population at large, a specific group or a privileged social class,” she added.

Dr. Abdelgafar asserts that a renewed maqasid methodology can be leveraged to critically assess existing policies or to design wholly new policies in ways that enable human flourishing.The maqasid bring together complex understandings, which integrate relevant concepts, objectives, values, rules, universal laws, parties and proofs giving rise to complex and useful understandings of both the revelation and the reality to which it applies. She insists that “such reference is not intended as a tool for proselytization but rather as an information source for any who seek the truth about how to establish a dignified life, one that not only preserves and advances the best of humanity but that includes, within its extensive limits, the values and rights of every living creature.”

The grounding of policy in maqasid directs the position of a nation in the world, how it articulates and defends its objectives, defines important concepts, acts upon its values, respects divine rules, accepts universal laws, acknowledges the role and nature of the parties involved in the policy process and understands the proofs that demonstrate the strengths and weaknesses of its position.

“We, therefore, need to examine what revelation has to offer policy studies by broadening our lens and sharpening the use of our reason, a characteristic that make us uniquely worthy of being human,” she concludes.

The conference was organised by the School of Public Administration and Development Economics (SPADE) in Doha Institute for Graduate Studies in collaboration with the Association for Middle Eastern Public Policy and Administration (AMEPPA).